Ore body variability can have a significant effect on the various elements of mine waste tailings disposal systems, including:

Ore bodies that are exploited using open-pit mining methods often consist of softer, weathered, clay-containing material near to the surface (oxides), transitioning to harder rock ores (sulphides) with increasing pit depth. A typical example is that of oxide and sulphide ores common to the Central African Copper Belt and some open-pit gold mining operations in West Africa.

The extractive metallurgical processes used for optimum refining of such oxide and sulphide ores are well understood and covered extensively in the literature—e.g. the roasting of copper sulphides ores prior to leaching. However, management of the tailings resulting from such processes appears to be less well understood by industry, particularly in terms of the impact of variable mineralization of the ore body on tailings thickening and pumping systems—potentially resulting in inappropriate sizing and selection of tailings thickeners and tailings pump and pipeline systems that could influence the deposition properties of the material.

This short article focuses on typical open-pit copper and gold mining operations that often treat a range of ore types that result in tailings with distinct rheological (viscosity and yield stress) properties. These would typically include:

A compounding factor is the often arid climate and scarcity of water, and so consistent water recovery from the tailings thickeners and deposition site is a key priority:

This relatively low slurry density, in combination with coarser grind sizes typical of older operations (i.e. reduced liberation of fines and clays if present) meant that rheological properties were usually insignificant; and, that tailings behaviour did not change significantly as a function of the properties of the ore being treated.

The figure below shows yield stress vs solids concentration by mass for the three tailings types from a deposit with typical oxide to sulphides transition. The three curves, from left to right, are for the oxide, transition and hard rock (sulphide) tailings, respectively. 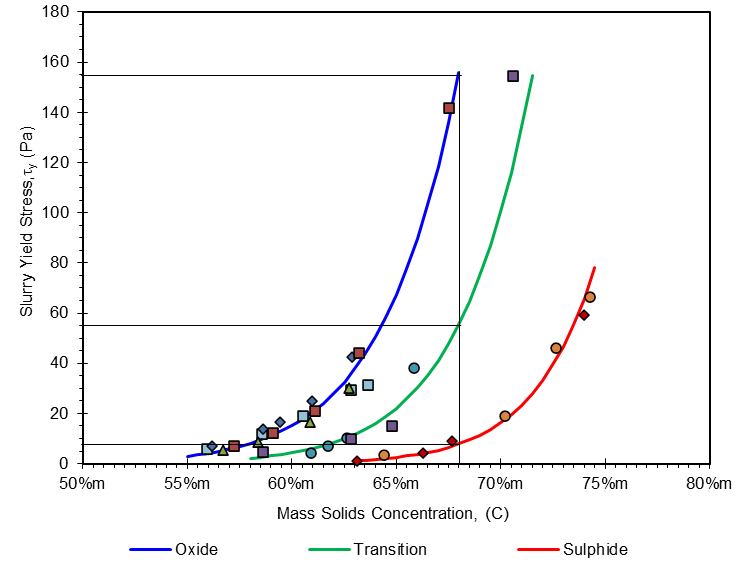 The highly variable rheological characteristics of the three tailings types need to be considered carefully in the design of the tailings management system, particularly if thickening to higher underflow densities.

For example, at a required thickener underflow density of 68% by mass, the sheared yield stress of the three tailings types is as follows:

The difference is presented visually in the following photos, which show Boger cylinder slump tests for oxide and sulphide thickened slurry samples at the same solids concentration.

To achieve a consistent underflow density to satisfy the water requirements requires a thickening strategy capable of producing the same underflow densities for materials with different settling characteristics and viscous properties.

The oxide ore would require modern paste or high rate thickeners with enough surface area and bed compression height to achieve the required densities, compared to the hard rock ore body that could be thickened with smaller diameter high rate or conventional thickeners.

To reach the furthest corner of the TSF from the tailings pump station would also require different pump and pipeline combinations:

The behaviour of these different materials at the tailings storage facility will clearly also be very different. The high yield stress oxide materials will likely form a more uniform and less segregated deposit than the lower yield stress material, and as mining progresses and the nature of the ore body changes, the tailings facility must be able to accommodate these variations.

For these operations with a highly variable mineralogy it is not always practical to design a dewatering and pumping solution that consistently delivers the required underflow density for a wide range in ore type and subsequent changes in rheology. It is often necessary to select a thickening and pumping system based on slurry rheology that will result in a moderate thickened underflow pumping density for the more viscous ore zones and will be able to achieve higher underflow densities for the less viscous materials.

To quantify the differences in a variable ore body it is necessary to conduct slurry test work to properly understand the material behaviour so that appropriate dewatering, pumping and deposition options are considered.

Failure to understand the variations in the material and the consequences on the operation can lead to significant equipment and piping selection errors and create a bottleneck for plant performance. This can have serious consequences in terms of CAPEX, OPEX and lost production.

Paterson & Cooke has the experience and capabilities to design optimum tailings thickening and pumping solutions, including: 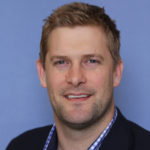 Carl is a Senior Engineer in Paterson & Cooke’s Cape Town Office. He joined the company in 2008 and has been the technical lead or has project managed numerous slurry pump and pipeline projects, from concept phase through to detailed design and project execution. He has extensive experience in the thickening and pumping of various tailings and concentrate slurries, including design of both centrifugal and high-pressure piston-diaphragm positive displacement pumping systems.