In-line flocculation is becoming increasingly more common in tailings dewatering. In fine tailings storage facilities, problematic clay mineral particles may not settle effectively and additional processes are required to promote dewatering. One process is to use polymer flocculation. A polymer solution is generally used to collect particles into larger groupings so they can be more easily separated from the fluid – often (but not always) a coagulation step is first used to alter the solution chemistry so that the clay particles are not repelled from each other. 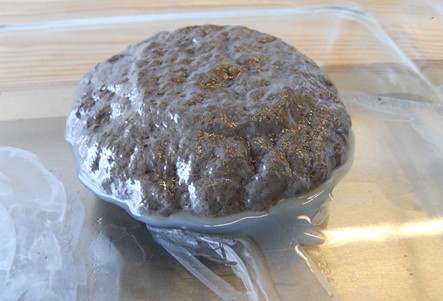 In some applications this flocculation process has been used in line – the polymer solution(s) is injected into the fluid as it travels in a pipeline and upon discharge (often a drying cell) the flocculation has occurred and the flocs are ready to drop out of the fluid and release water. A mixing element is typically required to achieve optimum flocculation. 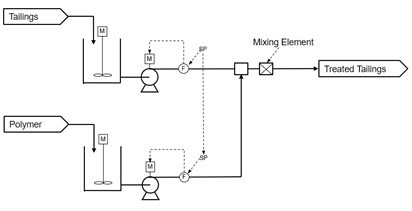 There are some unique challenges associated with in-line flocculation which include:

Flocculation can require a substantial amount of mixing energy to be effective, especially with higher solids content slurries. If static in-line mixers are used, the mixing energy is provided by the upstream slurry pump, but in some cases the energy required is too high for static mixers to be practical. In these cases, dynamic mixers are recommended.

Once flocculation has begun to occur, the rheology of the slurry will sharply increase. With the variability of some tailings, this increase is not always consistent, and it can be difficult to produce a consistent product as with static mixers the mixing energy is provided by the pump (inconsistent back pressure can cause changes in flow rate which results in incorrect dosing, etc.). P&C has found it is sometimes best to inject the polymer as close to the discharge point as possible as long as effective flocculation has occurred prior to discharge. Furthermore, decoupling the mixing energy from the pump by using a variable speed in-line dynamic mixer versus in-line static mixers provides a more robust dewatering process and helps achieve consistency.

A dynamic mixer properly instrumented can tightly control flocculation as the torque experienced on the mixer can be used to indicate optimum flocculation (occurs after peak torque). 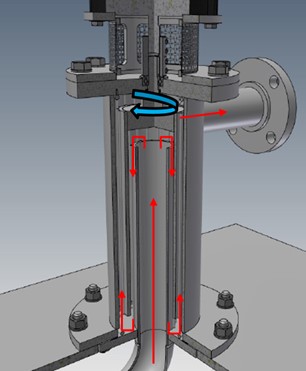 In conclusion, in-line flocculation can be an effective and cost competitive tailings dewatering solution if the mixing requirements are well understood and the necessary controls are in place. 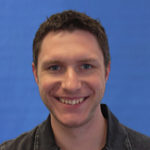 Dan Gillies started with Paterson & Cooke at the Denver office in August 2010 and relocated to the Calgary office in April 2014. He has been involved in the pipeline transport of slurries since 2008 when he began an MSc program through the University of Alberta. As a Project Engineer with P&C, Dan manages and assists with projects involving rheological testing, inline flocculation, and hydraulic design of pump and piping systems. Dan’s projects are primarily focused on the Alberta oil sands. Dan has valuable experience from working in P&C’s laboratories and has also spent time at various mine sites throughout Canada performing on-site tests.