This article presents the importance of a holistic approach to improve the performance of mine waste disposal systems treating ores with a variable mineralogy. Mine tailings that contain clay minerals such as iIlite, kaolinite and/or smectites are particularly difficult to dewater using thickeners. Small variations in mineralogy result in significant variability in thickener underflow densities and delivered flow rates that must be transported to the tailings storage facility. A brownfields upgrade recently completed by Paterson & Cooke demonstrated the importance of considering both the variable thickening and pumping requirements simultaneously, and not treating each as independent systems.

In this case, the thickening circuit was historically unable to consistently achieve the required underflow density and produced a considerably more dilute underflow density as well as occasionally ‘sliming’ where solids report to the overflow weir (see Figure 1). The limitations of the thickening circuit affected the downstream tailings disposal pumping system as the viscosity and volume of tailings varied significantly, resulting in blockages and operational challenges. Figure 1: Example of a Sliming Thickener

A comprehensive test campaign was conducted, both on-site and at P&C’s laboratories to better understand the material properties and dewatering requirements as mineralogy varied. The test work showed that the material can be thickened to the required density for the majority of the time and the variation in mineralogy has the following effects on the system:

Figure 2 shows the envelope of the various samples that were tested. The required underflow density is achievable for low viscosity material but challenging for high viscosity material where the yield stress increases quickly at low densities. To deliver the required tonnages when the material is viscous and can only be thickened to low densities results in a high flow rate, and as viscosity decreases and underflow density increases, the required flow rates that must be pumped to the tailings facility decrease. 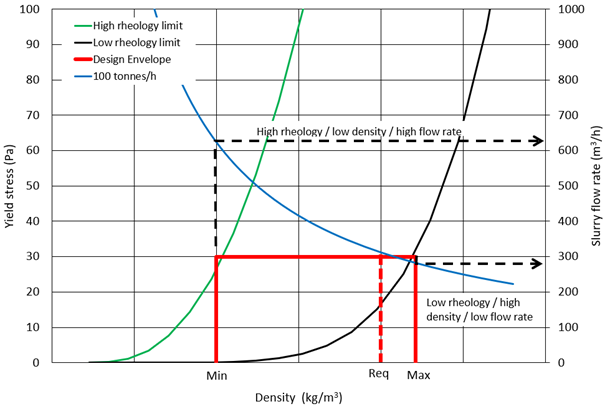 To achieve the necessary underflow densities, the thickening circuit required a number of upgrades, however the constraints of the pumping system needed to be understood to determine a suitable operating range for both the thickening circuit and the pumping system. Through a series of trade-off studies it was decided to limit the yield stress to 30 Pa for the following reasons:

As this was a brownfields site it was decided to upgrade the complete thickener circuit in stages, starting with one thickener to determine the incremental improvements of each change before upgrading all the thickeners on site. The following stepwise changes were done, evaluating the improvements in performance each time:

The thickener responded well with the upgrades as shown in the graph below.

The fully upgraded thickener produced consistently higher underflow densities, matching, and in some cases, exceeding the plant’s target density. The increase in density and the system’s capability of accommodating the higher density and yield stress material had the following positive impacts on the overall tailings disposal system: 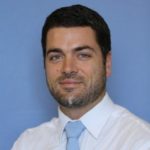 Kobus is a senior mechanical engineer based at Paterson & Cooke's Cape Town office. Since joining the company in 2011, he has been managing and executing a wide range of pump and pipeline projects from conceptual level through to construction and commissioning. Kobus has extensive experience in pump station and plant layout design as well as plant and overland piping route selection based on thermal expansion and pipe stress limitations.